Masauko has been recording in 2022, with plans for various releases in 2023. The big news is that he has been in the studio with Neo Muyanga and there is plans for a new Blk Sonshine album release next year. In early October, Masauko met up with Neo in Brooklyn, New York for recording sessions. As a producer, in 2022 Masauko has been working with South African hip hop legend Snazz D. and South African singer-songwriter Yolanda Zama, whose style continues in the tradition of Miriam Makeba.

This song is called “Sangweni.” It was written by Yolanda Zama with Masauko Chipembere. It is inspired by the kwela/ marabi style from South Africa. The sound made popular by Miriam Makeba and Dorothy Masuka. – Manawanga

Catherine Chipembere, wife to late Masauko Henry, on Saturday night proved age is nothing but a number when she took to the floor at Mibawa Café in Blantyre dancing to her son, Masauko’s song, ‘Old Shackles.’

Braving the cold and rainy weather, she joined an impressive audience to sample music vibes from Masauko.

“This is really nice, I want you to join me in this song. It’s good to be back home and perform and I am happy my mother is dancing as well,” said the dreadlocked Masauko.

He told the audience ‘Old Shackles’ was composed through his late father’s words “freedom is meaningless unless people can see change.” – Sam Banda jnr

Can Music Be Used To Transform Africa? | Face2FaceAfrica

On May 11th, a diverse group consisting of students, professionals, musicians, and artists, gathered in Brooklyn for an engaging discourse on African music as a tool of change in the continent of Africa.

The forum, hosted by the Filmmaker, Poet, and Activist Rebekah Frimpong, was titled, “Young African Visionaries – A Discussion of Africa’s Youth Through Music”, and brought together various African Musicians and Media Executives on a panel to share their views on the current state of African music, and how the longest form of communication can be used to inspire change locally, and to revamp the image of Africa internationally.

The forum also featured a special listening party with conscious Ghanaian Musician, Mensah, who hailed from London and blessed the room with his talent. He was also a Guest Panelist.

When asked to share their thoughts on how African music can be used to bring change to Africa, the panel agreed that Music is a universal language, and for that matter, its power can never be refuted. Mensah believes that one of the ways to affect change through music is to be as original and be keen on using music as a platform to showcase our identity. “When it comes to music, we have to be as original as possible because music gives us a certain super power. We may ignore it or may not even realize it but it does,” he added.

Emmanuel Gamor, who agreed with the statement added that consumers must also help musicians maintain that originality by accepting their music no matter how different it may sound. Emmanuel used the different types of Ghanain music as an example of how diverse the continent of Africa is when it comes to music.

One of the issues that came up during the discussion is the lack of appreciation of African music by Africans themselves. The panel noted that the only way African music can rise to the internationally level and make any progress towards the revamping of Africa’s image, is if Africans start appreciating their local music as much as they appreciate Western Music.

Some may wonder the role that African governments can play in helping our musicians maintain originality and encourage them to use music as a form of communication instead of merely entertainment.

Most African musicans are struggling because although they may have all it takes, they lack an effective system that pushes them forward. Communication laws are very weak, and it is almost as a “scramble” or a “survivor of the fittest” type of system for musicians.

With the spread of Itunes, Youtube, and other music sharing sites, African musicians are suffering tremendously from terrible album sales. Most of them make a living from touring and shows, however to make a name for themselves and get to the point of winning a reasonable amount of people to attend their shows is another hassle in itself.

Payola is still very prevalent in Africa, where musicians have to pay radio stations or even TV stations to get their songs aired. Essentially, a person could be tremendously talented, but without the financial ability or necessary resources, they may never be discovered.

The governement needs to tke a more proactive approach towards protecting our musicians and providing a platform that will enable them to compete on an international level and spread the positive things about Africa.

Overall, this ws a great discussion that instigated many more thoughts  and ideas about the current state of African music and the role that the youth can play in maximazing its impact. Face2face Affrica apllauds Rebekah Frimpong for seeing the importance of this issue and taking the initiative to provide a thought provoking platform where people can share ideas on how to affect change.

Blk Sonshine will be featured on ETV’s Unplugged Joy of Jazz programme on Wednesday 4th August at 9.30pm

Blk Sonshine at the Alexander Theatre somehow manage to transcend the venue’s rich ambience. It says a lot. Right in the heart of Braamfontein’s student district, by day the place bustles with workers and thousands of locals who live in the surrounding high rises. And by night the new middle class colonizes the streets: visible, boisterous and good-natured they trek here for sounds like no other.

Blk Sonshine is Masauko Chipembere and Neo Muyanga. Their first eponymous release came out in 1998. After ten-years, during which the duo split apart, one to the States, the other to Slaapstad, they released their second album, Good Life. They blend soulful melodies and percussive flurries over an acoustic flow evoking hip hop, jazz and folk among other traditional African influences.

The Alexander auditorium was happily full on the night. First up was Bongeziwe Mabandla, an up and comer, who dazzled with nothing besides a voice and a guitar, sincerely setting the tone for the show. After him was Two-parts Black who have rapturously diverting harmonies, then Tumi Molekane, poet turned MC, joined in. With spryly conscious rhymes and velvet lyricism, he was always going to be a crowd pleaser.  Then Blk Sonshine took over. I had to recline in my seat and take in the music. It was like a show tailored just for me. The band played a set list right out of my dreams. “Borders”, “Born in a Taxi”, “Building” and “Crazy,” – all firm favourites. Painter Nico Pocco – who did the covers for both their albums – dressed in a dashiki and white pants busied himself with canvas and paint (dirtying his pants). Soon an abstract painting emerged. The artist who has been with them from the beginning is a testament to the band’s easygoing commitment to keeping in touch with their roots. You’ve got to love that.

There’s sometimes a moment when audience and band are in unison live. Brought on by a familiar note, a gesture or a shared something in a song. At this show that moment happened during the tantric “Soul Smile”. Helped by its acoustic sparseness which enables intimacy as the vocals sink foxily in.

Songs from The Good Life made the crowd beam. It’s a much praised and understandably loved release. Watching the duo effortlessly interact with the audience, I was struck again by how consummate they are at winning a crowd, hatching a vibe and filling a room. The highlight for me was when Tumi returned with the rather dull MXO (who at this stage should like totally retire or completely renovate his sound). Along with Two Parts Black they all performed “Nkosi”. Masauko helpfully explained that Nkosi has a double meaning: “It means you know God for all those who believe, or just plain Thanks for anyone who doesn’t.”

The night came to a euphoric close with the song “Bahlalefi” (Sotho for “wise people”) from the first album. It seemed an appropriate end to a show dedicated, movingly, to the memory of Robbie Jansen and the dear departed Busi Mhlongo. Blk Sonshine are carrying the fire. We should thank them.

BLK SONSHINE – One Night Only

Fresh from wowing audiences at the National Arts Festival in Grahamstown, celebrated acoustic duo Blk Sonshine will be treating their Joburg fans to an all too rare live performance. (See details above) In late 2009 the act released their critically acclaimed, SAMA nominated album ‘Good Life’, ten years after their eponymously titled debut album.

“Blk Sonshine melted a freezing audience on Sunday night as they kicked off the music line-up at the National Arts Festival, cementing their performance as a rare musical treat on the festival line-up this year. And since we rarely get to see the chemistry between the very serious Neo Muyanga and charismatic New York-based Masauko Chipembere work its magic, it did not take long for audiences to warm up to them and let their hair down. Both armed solely with acoustic guitars, and equally matched in their playing and singing skills, their soulful music stretched and uplifted, even for those hearing the songs for the first time. Their final charm was when they sang: When we make love, you make my soul smile, with replies of “beautiful!” from the women, and the entire crowd drifted off, successfully wooed. The duo ended their set with the hit single Born in a Taxi and had the entire crowd singing along.” 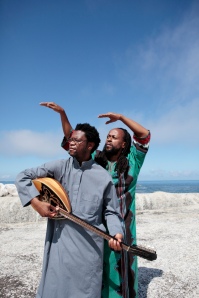 South Africa by Putumayo, contains 12 tracks from 12 different artists, all which live in or near South Africa. It is a fusion of Afro-pop, Latin jazz and African rhythms that will easily fit into any New Orleanian’s music library. One track that grabbed my attention was “Mbombela” |mom-beh-lah| by Bholoja, whose style is swazi-soul. The song is about hope and optimism in spite of the political turmoil that the people of South Africa have faced over the years. Blk Sonshine combined hip-hop, jazz and folk in their song, “Nkosi” |n-kor-see|, a thank you to God or a chief. The lyrics are a reminder to sift through the material world in which we live and focus on the fundamentals of life. Finally, my favorite track on the record is by Miriam Makeba also known as “Mamma Africa”. She was a part of the human rights movement, and in 1963 was more or less banished from her homeland after giving an anti-apartheid speech at the United Nations. Her song, “Orlando”, is an homage to the township where she was raised. The song appealed to me because of the African vocal styles on top of an American jazz composition. The vocal melodies especially stand out due to their unusual style on top of a 50’s era ballad. You can find this CD at www.putumayo.com as well as past projects the organization has put together. I’d recommend it to anyone in the mood for some refreshing sounds. —Brian Serpas

It feels like a sequel to 2000’s Putumayo Presents: South African Legends, with the addition of vibrant newer bands, along with veterans Miriam Makeba and the Soul Brothers. The NYC and Cape Town collaboration between Masauko Chipembere and Neo Muyanga (who form the duo Blk Sonshine) gives rise to a fantastically groovy blend of hip-hop and Afro-jazz on “Nkosi.”